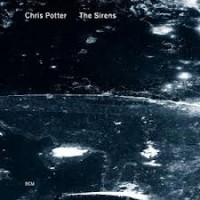 Login to Rate RATINGS and REVIEWS

Chris Potter’s Debut album for ECM Records Sirens is a stand out musical adventure illustrating Homer’s epic poem The Odyssey. While a full album dedicated to one overlying theme maybe a less explored area for Potter, his fans should still expect his uncanny display of virtuosity and eloquent musical sensibility. The sound of the album has a lush, ethereal, floating quality with contrasting levels of intensity and sensitivity.  The vastness of catchy singable melodies and strong rhythmic grove makes it a great disc for driving or for studious listening.  A large part of the album’s mystique is due to the augmentation of the standard quartet by the auxiliary keyboard work of David Virelles.  The use of prepared piano, celeste and harmonium adds a new dimension on top of an already vibrant rhythm section.

The albums opening track “WineDarkSea” is a colorful depiction of Odysseus’s voyage across the sea. Potter colors the voyage as potentially violent and certainly epic in nature. Interplay and intensity in the band builds up in a series of plateau stages before reaching a major climax as potter demonstrates exceptional use of his altissimo register. The high level of group energy continues throughout most of the album. The track “Wayfinder” incorporates an abundance of fluid moving textures. These textures quickly go from calm and serene to chaotic. Often the chaotic nature of the music can be attributed to the artistic key board interjections and solo work of Craig Taborn. “Nausikaa” and “The Sirens” are two very eerie sounding compositions; both make apt use of musical space which engages the listener and gives one a sense of intense listening and interaction occurring inside the ensemble. Potter’s bass clarinet tone on “The Sirens” has a beautiful warm resonance which really sets a dark floating mood. Larry Grenadier follows suit with a lovely arco bass solo before Potter closes out the number on tenor.

“Dawn” and “Peneolpe” are the two ballad features of the album. “Dawn” is a lovely show of sentimental playing from the entire group and features delicate interplay between Craig Taborn and Larry Grenadier. Potter does a masterful job on “Peneolpe” of conveying a romantic mood while simultaneously playing on the emotions of eagerness, longing and regret. The rhythmic drive of “Kalypso” is kept in perpetual motion by some very solid drum work from Eric Harland. A coda section following the final melody statement centers around Eric’s drumming infused with intuitive interplay between him and Potter. “Stranger at the Gates” consists of a series of simple melody statements which build and develop off of each other. Both Potter and Taborn take their time building up their solos as the song progresses while Harland and Grenadier continue to demonstrate their skills in supporting and responding to the soloist. The composition continues to the re-statement of the main melody before winding down with a short series of resolutions before it is closed out by Taborn. The ending of “Stranger at the Gates” sets up the final track of the album perfectly. “The Shades” is a short ethereal piece featuring Taborn and Virelles. Its brief, sparse melody is an exquisite soft ending to the record.

The Sirens may be a slight departure form what listeners expect to find on a Potter record, but his exploration of colors and storytelling should be welcomed by his fans.  Potter’s writing and playing around a centralized theme represents yet another step in a very progressive career. The Sirens is fantastic in its entirety, wither viewed a tune at a time or as a single composition.  Whether you are a longtime Potter fan or are new to his music, you certainly will not want to pass by The Sirens.

You must login or register to review this.