1945 GEORGE M. BUNDY - Letter Reporting on the State of Musical Instrument Manufacturing at Selmer Paris and in Europe after WWII

Letter as written by Selmer President George M Bundy in 1945

While the appearance of European-made musical merchandise on the American market may be somewhat slow, the only musical instrument plants that I had reports on as destroyed were some French violin factories at Mirecourt. Most of the British and French makers have been manufacturing in a small way for the Allied Armed Forces. Our three Selmer plants in France are going along with about 60% force, & await materials and power mostly, in order to go on to a fair rate of production. I believe it about the same with other French and English makers. 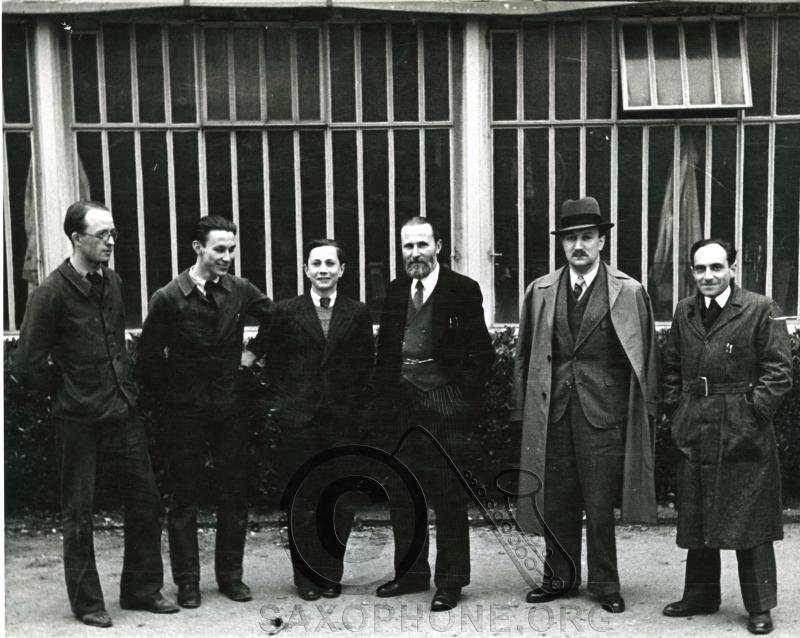 Of course, the French situation is bad temporarily, due to the extremely high cost of food which is the criterion of value there. Everyone has to eat, and while it costs so much to live, it automatically places a false value on other items. Our Selmer Paris brass instrument plant was entirely unharmed, the main reed instrument factory at Mantes suffered only the breakage of a few windows from concussion, and the smaller woodwind plant in Normandy was not damaged at all. One of the saddest happenings to the Selmer concern was the outright murder of Frederick Lefebvre (*shown here 2nd from left), oldest son of our Mantes director, Henri Lefebvre, which occurred when the Nazis were evacuating, Mantes. Young Lefebvre, in civilian attire walked past a machine gun nest, receiving 14 bullets. He was being especially trained in music and engineering as the eventual head of the main plant. His passing was a severe blow to the Selmer organization.

I spent about 5 weeks in London. The damage there from bombs is tremendous. All four of the larger musical firms, Dallas, Rose-Morris, Boosey & Hawkes and Selmer, have received direct hits on their establishments, although Boosey & Hawkes did not have damage to their main Regent Street store. Dallas Sons was bombed out twice, and Rose-Morris lost their entire building. Almost all the musical manufacturing in England was for the Armed Forces when I was there but with the Japan war ending, they must be turning rapidly to musical instrument manufacturing now. Used instruments were selling for far more than new ones formerly sold for. It was difficult to get into a good hotel in London, and one had to make reservation well ahead to get a meal in a good restaurant, where the prices seemed to be 2 or 3 times the prices in the U.S. The British show the wear of nearly six years of war, and continuous threat of invasion, and the dreaded doodle and buzz bombs, the largest of which wiped out complete city blocks. In the center of the old city of London, the warehouse district, there is a spot 1 mile square, which formerly held billions of dollars’ worth of buildings and goods, now entirely wiped out. Not one building left standing. This is very close to the present establishment of Rose-Morris.

While I thought conditions were difficult in London, when I managed to fly to Paris by a U.S. Military plane, arriving at Orly airfield, south of Paris, I found conditions much worse, as it was next to impossible to get a meal in a restaurant, and all the hotels were taken over by the armed forces, mostly American. I had to eat with the Maurice Selmer family in the Montmartre section of Paris, and sleep at Alexandre Selmer's home at Chatou, 16 miles up the Seine out of Paris. Maurice had some food but no extra room, Alexandre had plenty of room but was short of food. The only dinner I had outside was with Robert Vandoren and wife, and with the trimmings, I'll wager it cost around $26 per plate, U.S. equivalent. Still, even without meat, little butter, cream, eggs, etc., it was uncanny how good the French can make plain victuals taste.

I visited nearly all the French makers, including Buffet (M. Leseigneur), Jerome Thibouville Lamy (M. Acoulon), Leblanc-Noblet (M. Leon Leblanc), Robert Vandoren, Chedeville & Co. (M. Dulac), Couesnon & Co., (M. Stoecklin), M. Daru, Georges Thibouville,  Albert Lelandais, Henri Neerman, Robert Malerne, and all seemed well and on the job, ready to start doing export business again as soon as conditions permit. It was their unanimous opinion that the cost of manufacture right now is about 4 times that of 1939, but hoped that with lower costs of living, the franc (now valued at 2¢ in U. S. equivalent) would be devalued to 1¢ or less, nearer its purchasing value. They were surprised to see me, wondered how I got over so soon, saying that I was the first American civilian they had seen since '39. To give you an idea of difficulties, we used to go from Paris to Mantes in about 32 minutes. Now it takes about 1 3/4 hours, and when Maurice Selmer and I visited our Mantes plant, we had to stand up all the way down and back, the trains are so few, crowded and slow.

All the reed makers seem to have a fair stock of cane, and the pad makers have materials. There was a shortage of wood for woodwinds, brass, and lacquer. Pearl for finger buttons, etc. were about entirely out. I had several sessions with Mons. Bruck of the French Ministry of Production, musical instrument division, and did all in my power to impress him with the fact that it would be futile, at the present French costs, to try to sell in America to the trade. He realized this and said something would be done very soon to ameliorate this situation. Perhaps the present visit of DeGaulle, to Washington, will help this impossible condition. By the way, the French have a lot of confidence in the tall General, believing him to be honest and a real patriot. One cannot blame them for clinging desperately to a Government head of proven honor and integrity after their experience with dishonest politicians in '39-'40, and before.

Vegetables and fruit were starting to come into the market in Paris, and that helped the situation a lot. All of my friends begged me to send them powdered coffee, sugar, chocolate, soap, pepper, knitting wool, etc., and we have been making weekly shipments, as permitted in size and number , for months. Can you imagine going through entire winters here entirely without heat, hot water, soap, etc.? Many old and disabled French people committed suicide last winter. They just felt they could not go through with it again. While there is far less damage around Paris than around London, France was bled white during the long occupation of the Nazis with their thorough methods of locating and filching articles of value, especially food and drink. One amusing point seemed that the Germans were mostly not used to fine wines and champagne, so when they demanded the best, the French often gave them the youngest, cheapest, and they did not know the difference.

To give an idea of 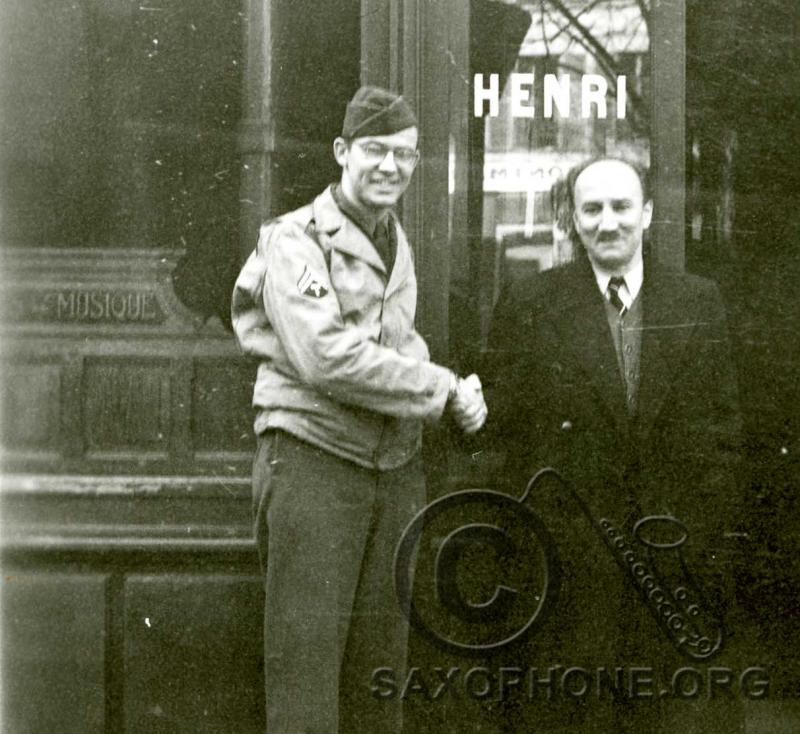 retail prices which American and British soldier musicians were paying as rapidly as Selmer instruments came off the production lines, Boehm clarinets $160 (8000 francs), trumpets same, alto saxophones $280 (14,000 francs),  tenor saxophones $320 (16,000 francs), etc. etc.. Our people felt they should do all that they could to take care of the demands of men in Allied uniforms, but the costs of production, due to high wages, shortage of manpower, materials, gas, coal and electricity, were fantastic. If the duty were added to these prices, you can readily figure the exorbitant figures arrived at. Finally, I believe that imported musical merchandise will appear in our markets by the end of '45, especially if costs of living go down in Europe in the interim.

I was especially proud on this trip to be an American. The smart appearance of our boys and girls in uniform over there, plus the orderliness and efficiency in American consulates, our transport and air command offices, gave me a real lift. Nearly every Englishman and Frenchman that I saw looked longingly for the day when he could visit the U.S. and especially California, which, due to movies and such seems to them to be a spot "just this side of heaven."