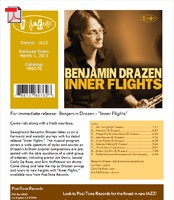 Login to Rate RATINGS and REVIEWS

The peaceful, John Lennon-like face on the cover ofInner Flights is merely a mask. Behind that calm exterior is a musician with killer instincts and serious chops. Sure, saxophonist Benjamin Drazen can be calm and graceful when he wants to, as he is on Inner Flights' closing track, "Polka Dots And Moonbeams," but more often than not, Drazen takes to the skies in spectacularly soaring flights.

On his debut album, Drazen dives head first into music of a mystical nature ("Prayer For Brothers Gone"), songs built on shifting terra firma ("Jazz Heaven"), original music created in the image of the great Thelonious Monk ("Monkish") and standards, both rare (Ira Gershwin's "This Is New") and commonplace ("Polka Dots And Moonbeams"). In creating this diverse program of music, Drazen also presents different pictures of himself as a soloist: in one instance, ripping through some burning, angular lines with a take-no-prisoners attitude ("Mr. Twilight"); in another, going through a spiritual catharsis over a loosely knit backdrop of arco bass, cymbal swells and pianistic waves ("Prayer For Brothers Gone"). While alto saxophone seems to be Drazen's main axe, he demonstrates great skill and potential, along with a Dave Liebman-like zeal, when he wields his soprano on the title track.

Pianist Jon Davis often shares the solo duties with Drazen, but some of the best moments come when they give drummer Eric McPherson some face time. "Monkish," which begins with a piano solo that's more caricature than homage, features some fine solo exchanges between Drazen, Davis and McPherson; the pianist going, perhaps, one step too far in his introduction, but more than redeeming himself during a solo spot which includes a brief "Bemsha Swing" quote. McPherson and bassist Carlo De Rosa masterfully steer the band through "Jazz Heaven," which is built on a continually shifting form, from straight swing to Latin, with a brief odd-metered detour in the middle. Eventually, De Rosa and Davis create a vamping presence in the Latin section, allowing McPherson free reign.

While Drazen proves his worth in a variety of settings early on, the final pair of songs fill in two of the most important missing pieces. The penultimate performance gives Drazen a chance to show that he can do the searching, '70s saxophone thing ("Kickin' Up Dirt") as well as the next guy, while the closing "Polka Dots And Moonbeams" proves that Drazen can excel in a standard ballad setting. With Inner Flights, Benjamin Drazen has created a complete and lasting work of meaning that's an early contender for best debut album of 2011.

You must login or register to review this.